City Walk to the Heidelberg College of Education

On June 21, 2016, Riad, Pranita and Eleonore were invited by Professor Bettina Alavi to visit a seminar for students of the Heidelberg College of Education and presented the City Walks project. 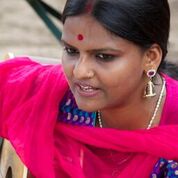 On June 14, 20 and 22 three city walks visited the Kunstverein Ludwigshafen. 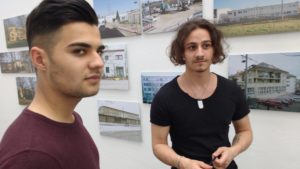 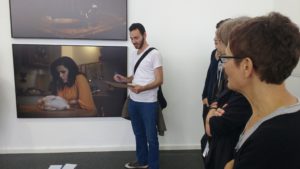 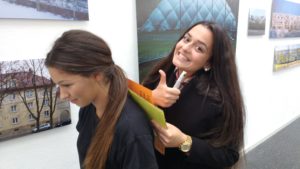 We visited the exhibition I BECOME GERMAN together with German school groups and members of the TARHIB group as well as German courses of the CJD. You can find all the information about the exhibition here:

High Up and Back Down

Today we (Andrea Lutz-Kluge and Eleonore Hefner) together with Tayseer, Ahmed, and some others, as well as a group from Hasan Özdemir’s German course for women visited the city hall. Treasurer Dieter Feid was waiting for us and introduced us to the secrets of municipal budgets. 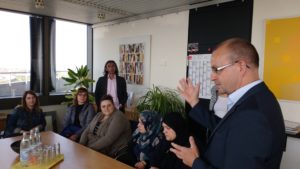 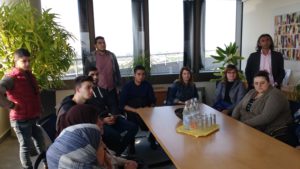 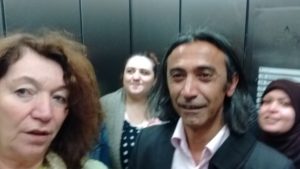 Up to the 80s, Ludwigshafen was one of the weathiest cities in Germany – now there is a record debt of more than 1.3 billion euros! Not an easy job to be treasurer in this situation. Dieter Feid pointed out: it is necessary to save, but nevertheless it is important to invest in schools and roads as well as sport and culture – also for the future of the city!

At the end, Mrs. Müller and Mrs. Hartmann explained the area of public relations and gave an overview of the work of the approximately 3400 civic employees. 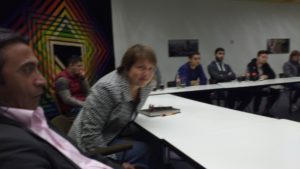 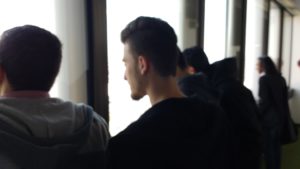 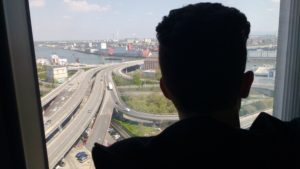 Italian Dinner with Syrian friends! Spaghetti made us happy! 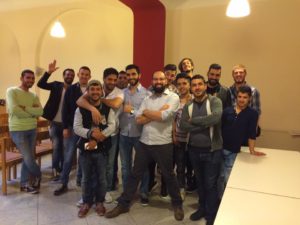 From May 18 – 21 the project group TARHIB went to Berlin.

We will (hopefully) have more to report soon! 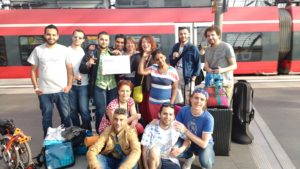 Only a few hours after returning from Berlin, the TARHIB group was again active in the Literary Sunday in Freinsheim (May 22, 2016). 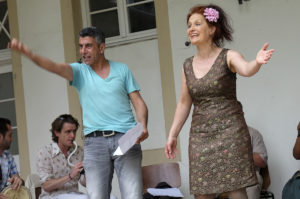 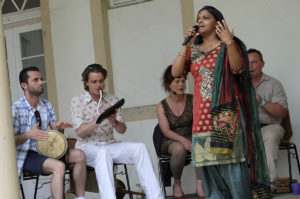 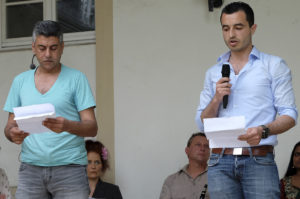 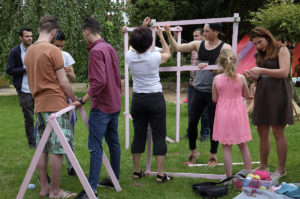 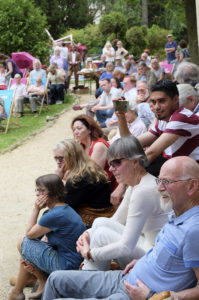 On Sunday, May 26, 2016, the tea lounge in the Kunstverein (art association) was a wonderful place to meet.The TARHIB group had grown again, and the musicians and guests got great enjoyment out of the musical dialogues. There was plenty of opportunity to converse with one another, to look at the photography of Maziar Moradi and to enjoy the Sunday while enjoying Arabic tea specialities with cardamom and fresh mint leaves as well as tasty pastries. 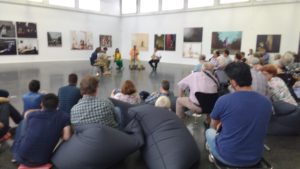 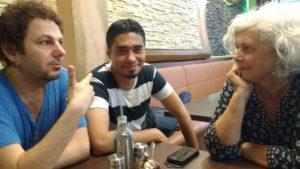 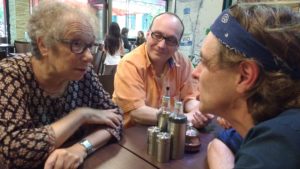 A Place of Silence

On Friday, June 11, 2016 we visited two churches: the Lutherkirche (Luther Church) and the Melanchtonkirche (Melanthon Church). The Lutherkirche was destroyed in World War II and has been kept as a memorial. There has been a restaurant in the ruins of the church for the past few years. The Melanchtonkirche was built after the war as an emergency church. City pastor Susanne Schramm told us about the history of the church and of the city of Ludwigshafen. Of course Martin and Katharina Luther, the reformation, and its consequences were the topic at the Luther-Brunnen.

We want to take part! One Billion Rising

After the events in Cologne on New Years eve, many of the men who live in the refugee camp at the Messplatz wanted to take a stand. We made some flyers, which will be distributed in town in the next few days. These flyers emphasize the refugees‘ NO to violence against women. We also are publicizing the action ONE BILLION RISING http://www.onebillionrising.de/. On February 13, 2016, at 13:00 we will dance for an end to violence against women.

In connection with the flyer action, there will also be a small exhibit in the Geschwister-Scholl-Gymnasium in Ludwigshafen. More news will follow!

I have a wife and daughter, and cannot understand what the men did in Cologne.

Fled from war, torture and persecution in his home country.

Lives in the refugee camp at the Messplatz.

„Yes“ to a life without violence.

Fled from war and violence in Syria and now lives in the refugee camp at the Messplatz.

I fled to Germany in order to live here in peace and as a good human being.

I love my mother and my sisters. No violence against women.

Lives in the refugee camp at the Messplatz.

My life is music. Music for a life without violence.

Fled from violence and war in Syria.

For an end to violence against women.

in front of the town hall in Ludwigshafen, Bismarckstrasse

History of a new city

Today we were in the City Museum. The director, Dr. Regina Heilmann, gave us a short overview of the history of Ludwigshafen. Ludwigshafen is only about 150 years old – compared to the history of Damascus, that is very young. Before BASF was founded, there were some old farms here; the remains of Roman settlements can also be found in the metropolitan area. But the city only grew along with the chemical factory. Thousands of workers streamed into the city – and it took a long time till there was housing for everyone. It took even longer until there was good housing. The city experienced two world wars, many deaths and great destruction. Sufficient housing has not been available for very long. The arrival of the refugees is another challenge to provide sufficient housing. This is being worked on. Our group today included bricklayers and carpenters – craftsmen who can help build a future for Ludwigshafen.

The short history lesson ended today with a typical dish of the region: potato soup. Here in the area it is frequently eaten – like lentil soup in many areas of Syria.